Sheridan has been hard pressed today.  He writes,

Commanding Armies of the United States:

GENERAL: The enemy’s cavalry attacked me about 10 a.m. to-day on the road coming in from the west and little north of Dinwiddie Court-House. This attack was very handsomely repulsed by General Smith’s brigade of Crook’s division, and the enemy driven across Chamberlain’s Creek. Shortly afterward the enemy’s infantry attack[ed] on the same creek in heavy force and drove in General Davies’ brigade, and advancing rapidly gained the forks of the reads at J. Boisseau’s. This forced Devin, who was in advance, and Davies to cross to the Boydton road. General Gregg’s brigade and General Gibbs’ brigade, which were toward Dinwiddie Court-House, then attacked the enemy in rear very handsomely. This stopped their march toward the left of our infantry, and finally caused them to turn toward Dinwiddie and attack us in heavy force. The enemy then again attacked at Chamberlain’s Creek and forced General Smith’s position. At this time Pennington’s and Capehart’s brigades of Custer’s division came up an a very handsome fight occurred. The enemy have gained some ground, but we still hold in front of Dinwiddie Court-House and Devin and Davies are coming down the Boydton road to join us. The opposing force was Pickett’s division, Wise’s independent brigade, and Fitz Lee’s, Rosser’s, and W. H. Lee’s cavalry commands.

The men have behaved splendidly. Our loss in killed and wounded will probably number 450 men; very few men were lost as prisoners. We have of the enemy a number of prisoners. This force is too strong for us. I will hold on to Dinwiddie Court-House until I am compelled to leave. We have also some prisoners from Johnson’s division.

I have sent forces to his aid.  I have hope that if reinforced, Sheridan can turn the enemy’s right and force him to abandon Petersburg and Richmond.  I wrote,

The Fifth Corps has been ordered to your support. Two divisions will go by J. Boisseau’s and one down the Boydton road. In addition to this I have sent Mackenzie’s cavalry, which will reach you by the Vaughan road. All these forces except the cavalry should reach you by 12 to-night. You will assume command of the whole force sent to operate with you and use it to the best of your ability to destroy the force which your command has fought so gallantly to-day. 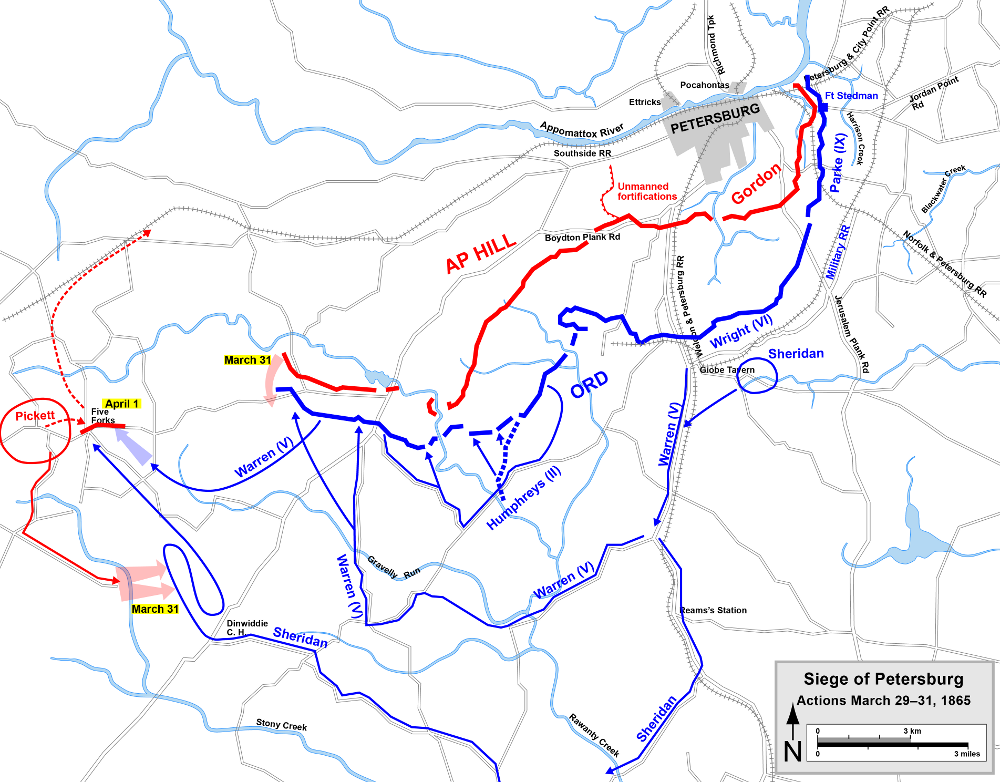 Our troops have repulsed the enemy’s counterattack and are advancing again. I wrote President Lincoln,

From Boydtown Road [March 31] 1865.
A. Lincoln
Our troops after being driven back on to Boydton plank Road turned & drove the Enemy in turn & took the White Oak Road which we now have. This gives us the ground occupied by the Enemy this morning. I will send you a rebel flag Captured by Our troops in driving the Enemy back. There has been four (4) flags Captured today. The one I send you was taken from a Va Regiment of Hunters Brigade.
U. S. Grant
LtGen

I received word from Gen. Meade,

HEADQUARTERS ARMY OF THE POTOMAC,

General Warren reports by staff officer that Ayres’ advance on White Oak road was repulsed. Ayres fell back to Crawford, the enemy following and attacking both Ayres and Crawford and compelling both to fall back to Griffin. Here the enemy was checked, the fighting still continuing. General Warren expresses confidence in his ability to hold his present position. Miles has been ordered to be prepared to support Warren. Humphreys will be ordered to attack as soon as I can communicate with him by telegraph, if the affair is not over by that time.

If the enemy has been checked in Warren’s front, what is to prevent him from pitching in with his whole corps and attacking before giving him time to intrench or return in good order to his old entrenchments? I do not understand why Warren permitted his corps to be fought in detail. When Ayres was pushed forward he should have sent other troops to their support.

There has been a vigorous counterattack by the rebels.  I wrote President Lincoln,

There has been much hard fighting this morning. The enemy drove our left from near W. Dabney’s house back well toward the Boydton plank road. We are now about to take the offensive at that point, and I hope will more than recover the lost ground. The heavy rains and horrid road have prevented the execution of my designs, or attempting them, up to this time. General Ord reports the capture of some prisoners this morning, but does not say how many.

We have had some adverse weather today, and that will hamper our operations.  I wrote Gen. Sheridan,

The heavy rain of to day will make it impossible for us to do much until it dries up a little or we get roads around our rear repaired. You may therefore leave what cavalry you deem necessary to protect the left and hold such positions as you deem necessary for that purpose, and send the remainder back to Humphreys’ Station, where they can get hay and grain. Fifty wagons loaded with forage will be sent to you in the morning. Send an officer back to direct the wagons back to where you want them. Report to me the cavalry you will leave back and the positions you will occupy. Could not your cavalry go back by the way of Stony Creek Depot and destroy or capture the store of supplies there?

I sent a report of our current progress to President Lincoln, who is staying in City Point to be near the front.

I understand the number of dead left by the enemy yesterday for us to bury was much greater than our own dead. The capture were larger than reported also amounting to about 160. This morning our troops have all been pushed forward, and now occupy a line from what you will see marked on the map as the Crow house across the Boydton Plank road north of where the Quaker road intersects it. Sheridan’s cavalry is pushing forward toward the White Oak road, and I think this afternoon or to-morrow may push on to the South Side road.

The enemy’s withdrawal from Warren’s front might mean that they are too weak to hold the entire line.  If we can stretch them further, we may be able to break through.  I wrote Sheridan,

Our line is now unbroken from the Appomatoc to Dinwiddie. We are all ready, however, to give up all from the Jerusalem plank road to Hatcher’s Run whenever the force can be used advantageously. After getting into line south of Hatcher’s we pushed forward to find the enemy’s position. General Griffin was attacked near where the Qoaker road intersects the Boydton road, but repulsed it easily, capturing about 100 men. Humphreys reached Dabney’s Mill and was pushing on when last heard from. I now feel like ending the matter if it is possible to do so before going back. I do not want you, therefore, to cut loose and go after the enemy’s roads at present. In the morning push round the enemy if you can and get onto his right rear. The movements of the enemy’s cavalry may, of course, modify your action. We will act altogether as one army here it is seen what can be done with the enemy. The signal officer at Cobb’s Hill reported at 11.30 a. m. a cavalry column had passed that point from Richmond toward Petersburg, taking forty minutes to pass.

Gen. Meade sent the first report of the results of today’s attack.

A dispatch of 5.50 p. m. from General Warren reports that on advancing to attack the enemy was found to have retired, and is supposed to have withdrawn to his main line of works. Major-General Warren is following him. The fighting was quite severe for a while. Casualties not yet reported. Brevet Brigadier-General Sickel wounded. General Warren’s left is on the Boydton pike. He states his skirmishers on the left report the enemy’s cavalry moving rapidly north from Dinwiddie; undoubtedly before Sheridan.

Commanding Army of the Potomac:

GENERAL: General Warren’s report of 5.50 p. m. looks as if the enemy may fall back behind Hatcher’s Run during the night, leaving the road open to us ot Burgess’ Tavern. If so, we will want to wheel to the right so as to cover all the crossings of the run as soon as we can. If the enemy does not fall back, we will then push up close to him and feel out to our left and endeavor to force him to this course. Sheridan has received orders to push for the enemy’s right rear in the morning, unless the position of their cavalry makes a different course necessary, and not to leave us until he receives further orders.

The battle of the 25th resulted in the following loss on our side: Second Corps-killed, 51; wounded, 462; missing, 177. Sixth Corps-killed, 47; wounded, 401; missing, 30. Ninth Corps-killed, 68; wounded, 337; missing, 506. Our capture were: by the Second corps, 365; Sixth Corps, 469; Ninth Corps, 1,949. The Second and Sixth Corps pushed forward and captured the enemy’s strong entrenched picket-line and turned it against him, and still hold it. In trying to retake this the battle was continued until 8 o’clock at night, the enemy losing very heavy. Humphryes estimates the loss of the enemy in his front at three times his own, and General Wright estimates it in his front as double. The enemy sent a flag of truce yesterday for permission to collect his wounded and bury his dead, which were between what had been their picket-line and their main line of fortifications. The permission was granted.

I wrote Sec. Stanton with a report of an enemy attack early this morning.

The following dispatch of General Parke is received from General Meade:

The enemy attacked my front this morning at about 4.30 with three divisions, under command of General Gordon. By a sudden rush they seized the line held by the Third Brigade, First Division, at the foot of the hill, to the right of Fort Stedman, wheeled, and, overpowering the garrison, took possession of the fort. They established themselves on the hill, turning our guns upon us. Our troops on either flank stood firm. Soon after a determined attack was made on Fort Haskell, held by part of McLaughelen’s brigade, Willcox’s division, and was repulsed with great loss to the enemy. The First Brigade of Hartranft’s division, held in reserve, was brought up, and a check given to any further advance. One or two attempts to retake the hill were only temporarily successful, until the arrival of the Second Brigade, when a charge was made by that brigade, aided by the troops of the First Division, on either flank, and the enemy were driven out of the fort, with the loss of a number of prisoners, estimated at about 1,600. Two battle-flags also been brought in. The enemy also lost heavily in killed outside of our lines. The whole line was immediately reoccupied, and the guns retaken uninjured.

I regret to add that General McLaughlen was captured in Fort Stedman; our loss was otherwise not heavy. Great praise is due to General Hartranft for the skill and gallantry displayed in handing his division, which behaved with great spirit in this its first engagement.