Sept 20 1861 Wrote Julia “I don’t know what to say about your coming.  I should like to have you here and at the same time I feel that I may have to leave any day.  I am in most excellent health, work all the time scarcely ever getting a half hour to take a ride out on horseback.  Everything looks quiet here now but it may be simply a quiet before a storm.  I believe I have gone longer without writing this time than any time previous since commencing soldiering.  Your last letter informed me of poor Simp’s [Grant’s brother, Samuel Simpson Grant] death.  It did not take me much by surprise, but it was right sad that he should die away from home.  Did you hear whether he was conscious of his approaching end or did he think all the time he would be better again?”

Sept 20 1861 Wrote Gen Frémont, “There has been nothing in the movements of the enemy for the last few days, that I could learn worthy of note.  They now seem to be falling back from Mayfield upon Columbus, Ky.  I have received no confirmation of the rumor that Gen. A. S. Johnson was to take command.”

“I left here after 1 o’clock this morning for Cape Girardeau and returned arriving at 2 o’clock P. M.  My visit was in reference to the Bittinger Property which has been taken possession of for purposes of Fortifications. …”

“I find the fortifications progressing fairly considering the large sick report at this post.”

Sept 17 1861 Wrote Brig Gen Charles F. Smith at Paducah, “I regret exceedingly that I am not able to spare you any troops in the present emergency.”

“A most extraordinary movement took place here yesterday which will compel me to contract my present limits particularly on the Ky shore.”

“I have received orders and have sent off two of the best regiments under my command, where can only be surmised.  My orders read to the O & M Railroad where transports would await them.”

Sept 16 1861 Wrote Gen Frémont, “I have no news of the movements of the enemy today to communicate that has not already been telegraphed.  If not moving from, he is keeping close to Columbus.”

“The most important point learned, if true, is that Gen. A. S. Johnson was to take command and on Friday last was to have moved with 10,000 men upon Paducah.”

“I do not think this movement has been made however or I should have heard of it.”

Sept 15 1861 Wrote Gen Frémont, “Reconnaissances which I had made yesterday disclose the fact that the enemy have broken up their Camp above Belmont, also that they have no force from there to some distance beyond Charleston.”

“As telegraphed by me today I believe they are leaving Columbus.  Whether marching upon Paducah or leaving Kentucky altogether, I will try to determine tomorrow.”

Sept 13 1861 Wrote Brig. Gen John A. McClernand, “The troops now at Fort Holt, Ky, with the exception of the 24th Ill Vol Col Hecker commanding, the detachment of artillery and Capt Delano’s company of Cavalry will march tomorrow and take position at Fort Jefferson Ky.”

“Colonel Ross will select the position for the camp, establish guards and make all needful regulations for the new camp.”

“The movement will be protected from the water by Gun Boat Taylor.”

Sept 12 1861 Wrote Gen Frémont, “I am told a paper picked up below here today gives the Rebels loss in the little engagement with our Gun Boats yesterday at 68 killed, three Guns and Gun Boat Yankee disabled and a large number wounded.  Of course the Federal loss is reported very large.”

“I am of the opinion that if a demonstration was made from Paducah towards Union City [TN] supported by two columns on the Kentucky side from here, the Gun Boats and a force moving upon Belmont, the enemy would be forced to leave Columbus leaving behind their heavy ordnance.”

“I submit this to your consideration and will hold myself in readiness to execute this or any plan you may adopt.”

Sept 11 1861 Wrote my sister Mary, “The troops under me and the rebel forces are getting so close together however that I have to watch all points.  Since taking command I have taken possession of the Kentucky bank opposite there, fortified it and placed four large pieces in position.  Have occupied Norfolk, Missouri and taken possession of Paducah.  My troops are so close to the enemy as to occasionally exchange shots with the pickets.  To day, or rather last night, sixty or seventy rebels came upon seventeen of our men and were repulsed with a loss of two men killed on their side, none hurt in ours.  Yesterday there was skirmishing all day.  We had but two wounded however, whilst the loss must have been considerable on the other.”

“What future operations will be, of course I don’t know.  I could not write about it in advance if I did.  The rebel force numerically is much stronger than ours, but the difference is more than made up by having truth and justice on our side, whilst on the other they are cheered on by falsehood and deception.  This war however is formidable and I regret to say cannot end so soon as I anticipated at first.”

Sept 10 1861 Wrote Gen. Frémont, “This morning Col. Waagner started from Norfolk with all the force that could be spared from that point to reconnoiter towards Belmont supported by the Gun Boats Conestoga & Lexington.  He went as far as Beckwith Farm, about 5 miles below Norfolk.  — Found no regular force but had one man wounded and lost one Horse by shots from the Pickets of the Rebels. — The Gun Boats however penetrated further & found large numbers of cavalry on the Missouri shore and as near as they could ascertain, fifteen pieces of artillery on wheels and one large piece in position.  Some of the pieces were ascertained to be 24 pounder rifled guns.”

“The Rebel Gun Boat Yankee could not be induced to come far from a Battery on the Ky shore.  Capt. Stembal however succeeded in bursting a shell in her wheel house disabling her so much that she retired, working but one engine.”

“The Batteries on shore were silenced and the officers commanding Gun Boats think with considerable loss to the enemy.  On two occasions they saw shell explode in the midst of their batteries after which they could see by the aid of their Glasses men being carried to the rear.  One man was wounded dangerously by a musket ball fired from the shore.  Further than this no damage was sustained by either of the boats.

“The machinery of the Lexington is out of order and I have permitted her to go to mound city for repairs.  All the forces show great alacrity in preparing for any movement that looks to meeting the enemy and if discipline and drill was equal to their zeal, I should feel great confidence even against large odds.”

“The enemy were seen to cross and recross the river with what design I am at a loss to tell — my impression is that they want time to prepare either for defense of their present position or for an advance on one of our positions, likely Paducah.”

“If it was discretionary with me, with a little addition to my present force I would take Columbus.  Your order however will be executed.” 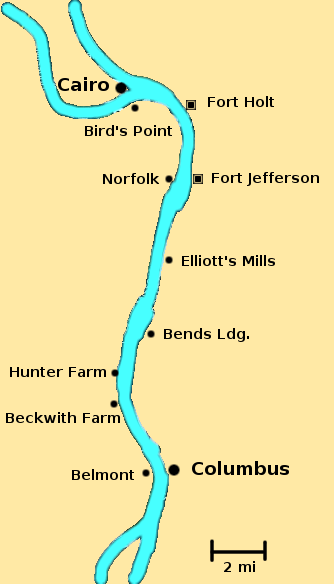